Sir David Steel talks to Maureen Paton about the church minister seen as a dangerous subversive for speaking out against Britain’s brutal suppression of the Mau Mau revolt. 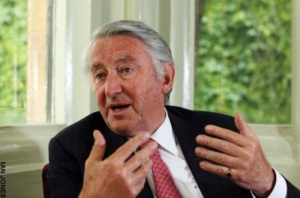 It’s an unsettling experience to see a politician as dapper as David Steel suddenly breaking down and weeping as his face contorts in a losing battle for self-control.

Tears don’t become Baron Steel of Aikwood, the former Liberal leader. He has survived a good deal: from the humiliating jibes about him being Dr David Owen’s puppet when the SDP amalgamated with his party to form the Liberal Democrats, to early-stage prostate cancer in 2001.

Yet his steely (no other word for it) self-possession had never deserted him until he was finally ambushed into tears by the filming of a television documentary in which he investigates the subversive history of his Presbyterian minister father, David Steel Senior. The Very Reverend David, who died aged 92 in 2002, was a classic example of a turbulent priest, in true Thomas à Becket tradition.

When I meet him at the House of Lords, Sir David (as he prefers to be called) has recovered his sang-froid and sends himself up mercilessly over that wobbly moment of emotion.

“I call it Blub Television because I’m not someone who cries easily,” he says in his soft Scottish purr.”It’s just that the moment was so powerful. I had just been to visit my father’s memorial stone at the Kikuyu mission station. The family decided to bury his ashes there because Kenya was the high point of his ministry. It was quite a fraught moment.”

Fraught in more ways than one. Steel’s purpose in making a programme for a new Channel 4 series, Empire’s Children, was to explore the hidden background of his father’s bold role in helping to change the course of history in colonial Kenya, by preaching an inflammatory sermon.

Broadcast throughout the country on January 9, 1955, and called “The Massacre of the Innocents”, it consisted of a biting attack on the colonial government’s policy in the early 1950s of flinging suspected members of the violent rebel movement known as the Mau Mau into barbed-wire camps where scores died – either from beatings and neglect, or from the hangman’s noose – without trial.

“It was our Guantanamo Bay exactly,” acknowledges Steel, whose father’s indefatigable backstage lobbying on behalf of imprisoned parishioners even extended to a letter to the Church in Scotland that claimed to have evidence of the murder of detainees.

The Steel family had moved to Kenya in 1949 when Steel junior was 11. As the newly appointed Minister of St Andrew’s Church in Nairobi and also the Parish of East Africa (which included Uganda and Tanganyika), his father presided over a congregation occupying an area the size of Europe.

In terms of precedence, he was – alongside the Anglican Bishop – second only to the Governor of Kenya. By the time his father’s sermon was broadcast, young David was back in Scotland completing his education.

Yet although he knew about its contents, which were widely reported at the time, he did not know, until he came to make the documentary, that one of his father’s most trusted colleagues, the Reverend John Gatu, had been a member of the Mau Mau.

Strange bedfellows, indeed. Gatu, however, claims in the documentary to have baled out before the atrocities associated with the Mau Mau began.

“As an advocate arguing on behalf of the detainees, my father got five [Mau Mau] released. They were very active church members and he assumed they were not involved with Mau Mau activities. But I’m sure my father didn’t know that John Gatu had taken the initial Mau Mau oath of allegiance,” Steel says.

And he concedes that “it’s perfectly possible” that some of those detained could also have belonged to the Mau Mau. “But the point was that they were being imprisoned indefinitely without trial.”

Unequivocally presented as bloodthirsty terrorists by contemporary British newsreels, whose thundering voiceovers seemed to have been performed by a real-life incarnation of Harry Enfield’s Mr Cholmondeley-Warner, the Mau Mau sprang out of a movement dedicated to achieving independence from British rule in the late 1940s.

Their rise was triggered by the cynical land-grabs carried out by the colonial government to encourage European settlement. Routinely depicted as rampaging savages on a vendetta against the white man, the Mau Mau became the first terrorist group to achieve world recognition and press attention.

Thirty-two Europeans died at their hands, often gruesomely, as did 2,000 black Kenyans, whom the Mau Mau suspected of collaborating with the colonial government.

The Reverend Steel did not support the violence of their protest and, as was standard practice, was forced to carry a loaded revolver in his car when visiting parishioners.

But he had a great deal of sympathy with the plight of the dispossessed Africans, and was incensed by the equally vicious response of the Establishment to Mau Mau protests, the incarceration of thousands of black Kenyans in barbed-wire camps and the hanging of 1,000 of them without trial. He went on the warpath from the pulpit without regard to any personal risk and was increasingly perceived as a dangerous subversive by the colonial Establishment.

In the course of filming, Sir David also discovered that the Reverend David’s main informant was Duncan MacPherson, head of Kenya’s CID and a member of his congregation, who was also shocked by the maltreatment of the detainees.

The Kenyan Cabinet considered expelling Reverend Steel, but decided that he knew too much of what was going on and would therefore be more dangerous back in Britain than in Kenya. Eventually, he left Kenya of his own accord in 1957, six years before its independence, after helping to bring about a united, interracial Presbyterian Church of East Africa.

Sir David says he is “very proud” of his father and what he achieved.

“I don’t think I’m regarded as any kind of subversive,” he adds. “I’ve been a career politician – it’s rather different.”

Yet despite the smooth image, Steel has certainly paid his dues when it comes to radical politics: from 1966 to 1969, he was president of the Anti-Apartheid Movement of Great Britain, and he sponsored the landmark Abortion Act of 1967.

“Living in Africa for four years and having black servants and being educated separately from other races all spurred me on to make my mark,” says Steel, who was also involved in the campaign against the Springbok rugby team’s tour of Britain in January 1970.

He later fell out with his former Liberal colleague Peter Hain (now Work and Pensions and Welsh Secretary) over the issue of direct action.

“Peter was young, idealistic, a South African student, but I had to take a quite different approach as an MP – although we remain good friends to this day,” says Steel.

“But that was my trickiest time politically, because my constituency, the Scottish Borders, was and is the centre of rugby; it’s their second religion. My majority went down to 500 in the elections the following June, so it was tough. But if you go against the grain of public opinion, it’s not easy; and my father must have had the same experience.”

There is an enduring stability about Steel, who has been married to Judy, a lawyer, for 45 years.

A self-confessed absentee father because of his years in Westminster, Sir David has two sons and a daughter, with the latter, Catriona, following her father into (local) politics.

He and Judy share a converted tower in his constituency but much of his time is still spent in London, at the House of Lords, or abroad, supporting yet another fledging democracy.

“I do freelance work on democracy promotion, which is pretty hard going,” says Steel, who is just back from Kenya and Uganda for the Commonwealth Parliamentary Association.

One place he used to visit regularly was Zimbabwe until, in 1971, his form as an anti-apartheid campaigner got him thrown out of the then Rhodesia by its former white leader Ian Smith. Robert Mugabe is unlikely to offer a warmer welcome.

“I last saw Mugabe when he was about 75 on his private plane; he was being very friendly and asked me to come and sit with him. But one of the things that altered him was the death of his wife Sally, a wonderful woman. And then he took up with this younger woman, his secretary, and I didn’t take to her at all. He just seems to have gone off the rails since about that time.”

Steel resigned his Westminster seat in 1997 and was elevated to the Lords, where his life appears to be so fulfilling that he certainly doesn’t wish to be in his old friend Sir Menzies Campbell’s shoes as leader of the Lib Dems.

“Although Ming is 66, three years younger than me, I regard us as contemporaries,” says the much more youthful-looking Steel.

“I wouldn’t have taken on the job of leader myself at this age. I think it’s a tough job; but good luck to him, he’s very able.”

Asked whether he would serve Gordon Brown in some capacity if, like Shirley Williams, he were approached, he refuses to comment.

“This whole subject is such a bone of contention,” he explains.

“But I know Gordon reasonably well; we have a similar background, since his father was a church minister in the same area as mine. I think he will be very different to Blair: he has a lot of gravitas, he’s a serious and purposeful man.”

Michael Foot once cruelly described David Steel as “a politician who passed from rising hope to elder statesman without any intervening period”. Yet Steel claims to feel satisfied with the way things have turned out.

“People have said to me, ‘But you’ve never had political power’ – and that’s true. I think I’ve had quite a lot of political influence, and not many people can say that.”

It is a sentiment his father would recognise.

St. Andrew’s Nairobi was the scene of my brother’s wedding. I was his best man. In the congregation at the time was my sister-in-law’s roommate, Janine Harry.

I help you find actionable insight.
View all posts by jayhack2012 →
This entry was posted in Character Studies, Kenya, UK-Scotland-South and tagged character, faith, peace, Steele. Bookmark the permalink.